What is energy storage augmentation? As the name suggests, augmentation is either adding capacity and overbuilding an energy storage system or modifying the system as it ages with additional battery assets to maintain system capacity.

Why may augmentation be necessary? The crux of the matter is this: Batteries degrade and lose capacity over time, and the degradation profiles vary by storage technology, battery chemistry, and usage factors such as cycle count, temperature, and resting state of charge. But unlike batteries, the electrical system’s needs do not decrease over time, so developers and asset owners must decide whether to overbuild the energy storage system at the beginning of the project or augment the system later. 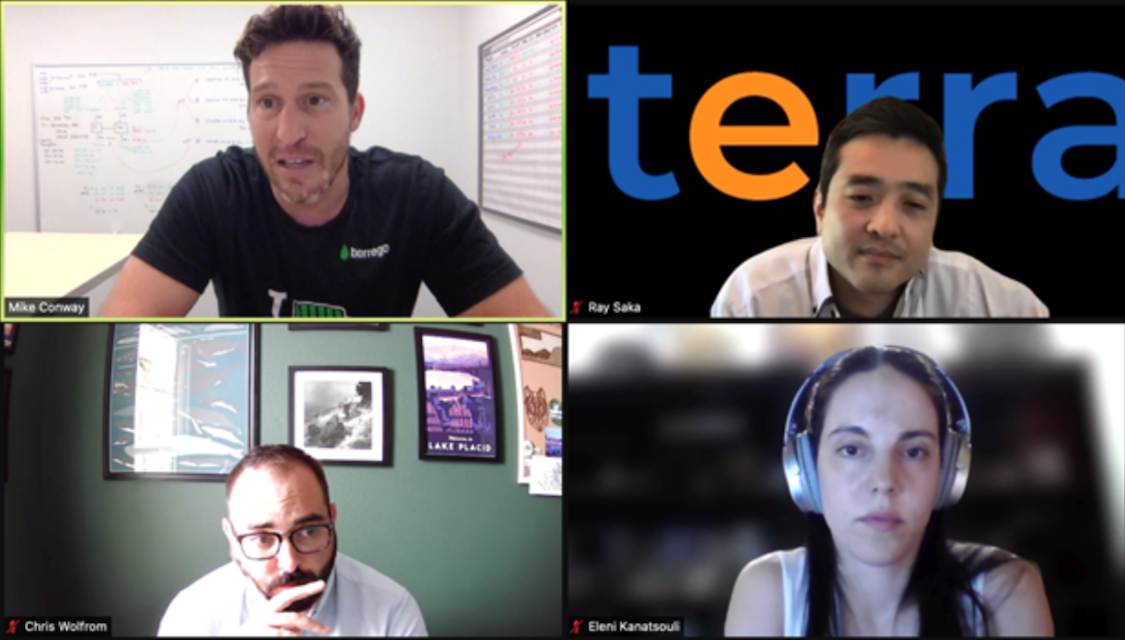 In a recent webinar on the topic, subject matter experts from Borrego and IHI Terrasun discussed the ins and outs and pros and cons of various storage augmentation approaches. Moderator Eleni Kanatsouli, Borrego’s energy storage product operations manager, was joined by Borrego’s Chris Wolfrom, storage solutions engineer, and myself, as well as Ray Saka, VP of sales and service for solar and storage integrator IHI Terrasun Solutions. After their presentations, we fielded attendee questions.

I explained that there are two main customer groups interested in augmentation, each with very different business cases for doing so. On the one hand, utilities are looking for guaranteed or firm capacity that will align with their resource adequacy requirements or systems needs. In this case, augmentation is generally a contractual requirement and is built into the price bid in the contract. For utilities, degradation of system performance is not an option: 100 megawatt-hours per year contracted must be 100 megawatt-hours annual output for the life of the project.

On the other hand, investment-side storage owners or independent power producers (IPPs) are looking at augmentation as a strategy to maximize revenues. Their decisions are based on a cost-benefit analysis, and they want to know what approach will provide more project revenue. For solar-plus-storage systems with relatively low annual cycling requirements, energy storage degradation stays generally on pace with PV module degradation, therefore augmentation is used less frequently. For standalone storage systems compensated under rate tariffs, owners must ask if the incremental value of the augmented capacity—adding battery capacity in the later years of the contract—outweighs the cost of that augmentation. If so, augmentation makes sense.

As Chris pointed out, developers, EPCs and storage integrators need to decide whether to design the storage system for future augmentation or massively overbuild the system from the beginning. Risk-averse financers sometimes like the overbuild option, as it lowers the technology risk despite the higher capex costs for that approach. 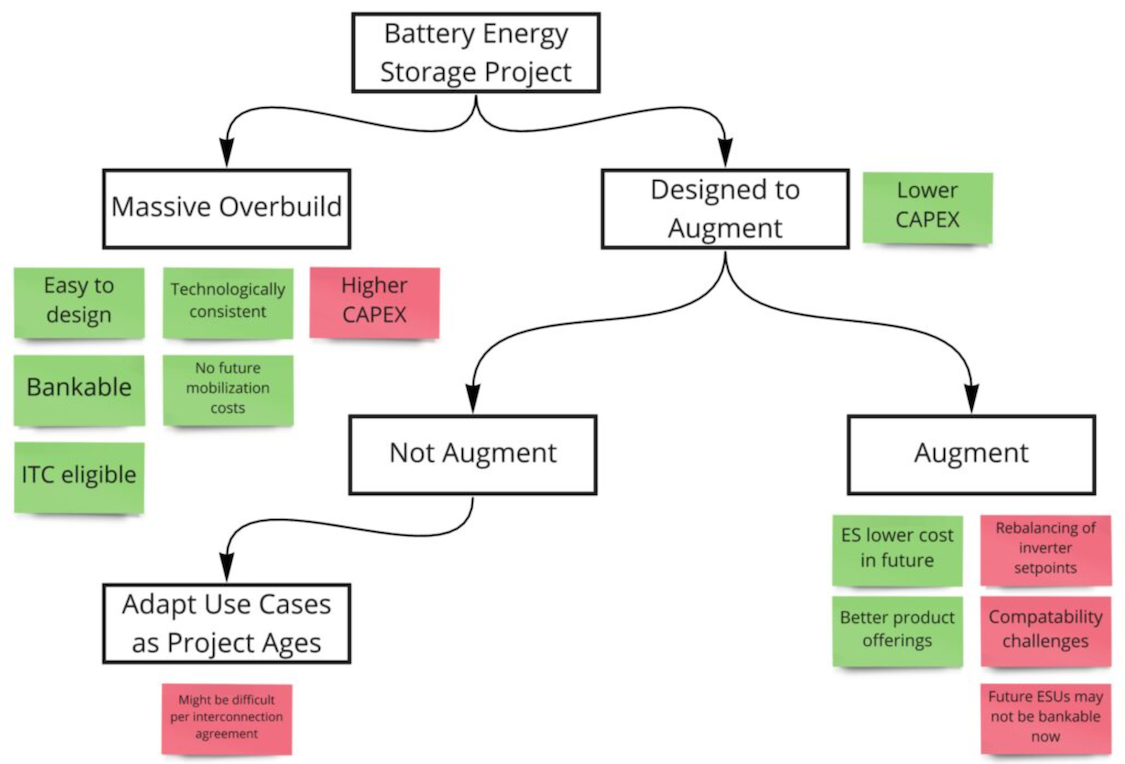 There are several good reasons to design for augmentation, such as lower capex, the potential to take advantage of lower-cost, higher-performance products and components, and the flexibility to abandon augmentation, if desired, because of lower system value. On the flip side, some of the reasons for not pursuing an augmentation strategy include compatibility issues between current and future technologies, the lack of bankability of new products, the costs of future labor and other mobilization, and uncertainties around policies such as the Federal Investment Tax Credit.

Ray of IHI noted that distributed generation storage systems tend to be overbuilt, while utilities augment their systems at the 4-5 year mark. He underscored Chris’s points by noting that augmentation strategies are typically driven by assumptions of both reductions in battery prices and shifts in technology as well as potential market shifts and labor rates and construction costs.

Chris and Ray both weighed in on the arguments for and against taking an AC- or DC-based storage augmentation strategy. The AC path has the flexibility of being energy storage unit (ESU) agnostic and thus easier to deploy, but is the more expensive approach due to the need for extra inverters and related EPC work. The alternating-current approach also could run into technology compatibility issues and lengthy discussions with the utilities on changes to the interconnection agreement. 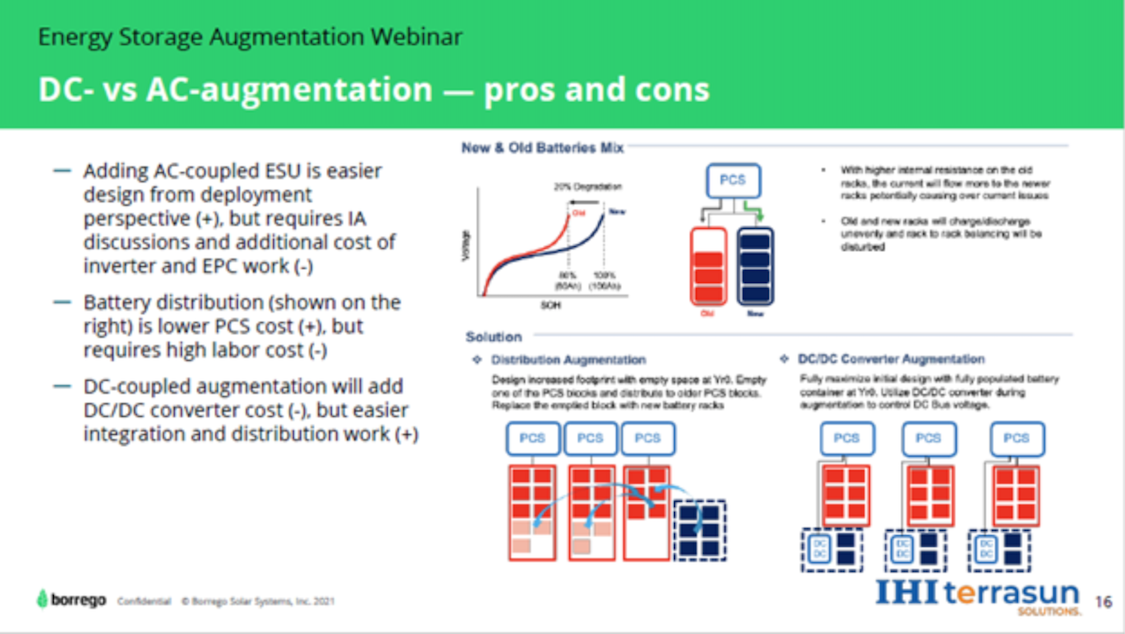 DC augmentation requires more planning than the AC approach, they explained. In general, it adds DC-DC converter costs, but is easier in terms of integration and distribution work. The two pathways for DC augmentation—adding battery modules or adding battery containers—each have their own pros and cons. Bringing in new replacement batteries is relatively inexpensive in terms of installation and avoids additional land usage, but could face issues around technology mismatches and requires rack-level DC-DC converters.

The prevalence of ESU containers has increased, which allows for redistribution and repopulation where the older ESUs can live behind one inverter and the newer ones can sit behind another, avoiding issues with voltage and other potential electrical balance of systems issues. This type of containerization also requires no additional DC conversion and is generally manufacturer and technology agnostic.

When asked during the Q&A session whether they’re seeing customers choosing to go with more AC or DC, we agreed that, as Chris put it, there seems to be “more appetite for the DC augmentation strategy,” citing the high-cost impediment of the AC approach. I also noted that strict interconnection agreements in many places (and long interconnection queues) are another impediment to AC, with retrofits to older systems requiring a whole new layer of impact studies and the like that would result in significant project delays.

For any storage augmentation approach, the key is to plan ahead or the cost of implementation may blow past what’s been budgeted. Ray outlined several factors to keep in mind:

To learn more about energy storage augmentation, sign up to watch the replay of the webinar and the in-depth Q&A session here.