Are You Ready to Supersize Your Solar Projects?

GET THE WEBINAR ON DEMAND

Large-format modules, or LFMs, are one of the most intriguing solar product innovations in recent memory. PV cell and module innovation in general has been on a roll the past few years, as monocrystalline wafers have become the standard, and features such as cell-splitting and tiling, multi-busbar architectures and cell-to-cell interconnect schemes, bifaciality and other advancements have boosted efficiencies and module power ratings.

But it’s large-format modules, with their significantly increased power output — and especially their potential to greatly reduce utility solar project construction costs — that have caught the eye of solar developers, EPCs and asset owners.

Borrego is keenly interested in LFMs, and we have been sharing our perspectives, including a recent article in North American Clean Energy magazine. We have already procured a large amount of the big modules and are penciling them in for use on projects in our development and EPC pipelines. 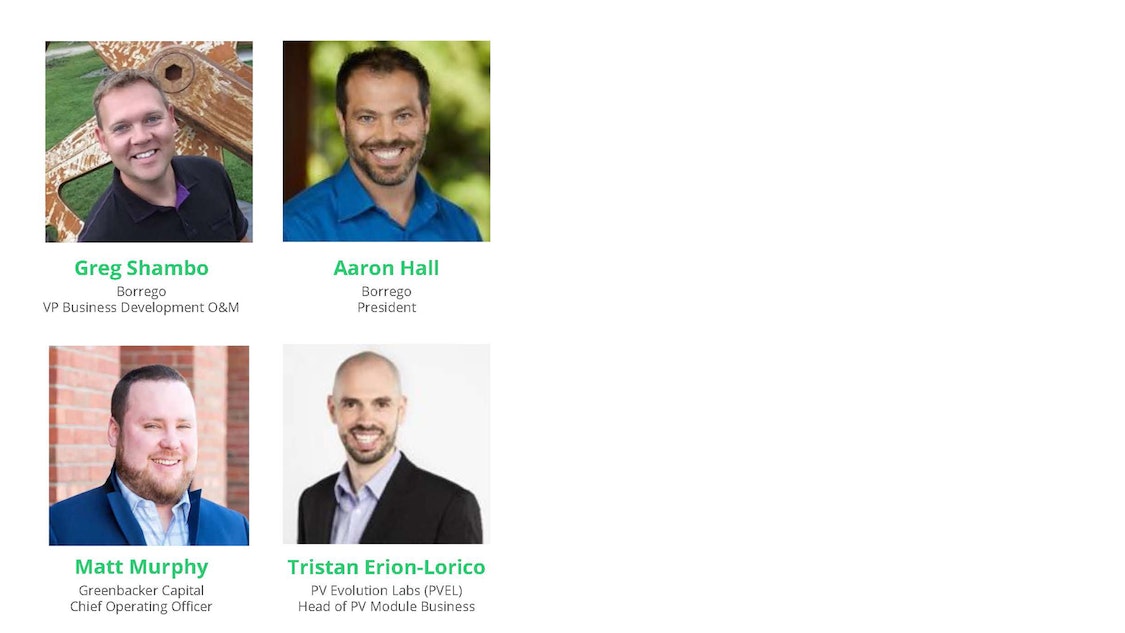 We recently hosted a webinar on the topic, titled “Supersizing Solar: Understanding the Technology and Business Case for Large-Format Modules.” The event featured an expert panel, including testing and reliability guru Tristan Erion-Lorico, head of PV module business at PVEL and veteran solar developer/asset manager Matt Murphy, COO at Greenbacker Capital. As Borrego’s president and cofounder, I also shared my experience as one of the industry’s leading experts in module procurement. Greg Shambo, our senior VP of business development for O&M, served as moderator.

The Evolution of Module Sizing

Tristan from PVEL explained how the 182-mm and 210-mm wafer-based LFMs are the latest evolution in module sizing. Calling the two competitive module sizes a “VHS versus Betamax-like” moment, he noted how certain manufacturers are putting all their eggs in one size basket, while others are hedging their bets with designs based on both sizes. He added during the webinar Q&A that he’s seen encouraging signs of standardization among the respective LFM offerings.

PVEL has at least a dozen different LFMs going through its rigorous lab testing protocols, and Tristan said there are issues showing up that should be addressed.

Since larger modules might be susceptible to microcracking given their prodigious size, he suggested a more robust frame or thicker glass as a way to strengthen some models.

He also pointed out that the higher currents inherent in the LFMs could lead to hot spots and increased degradation potential. He also warned of “re-engineering costs” for developers and EPCs, if the larger modules are brought into a project too late and are not designed into the early stages of site development and engineering.

Once testing is completed and the data analyzed, PVEL will release some of its findings on LFMs later this year.

Are large-format modules a bankable technology?

Matt from Greenbacker Capital said he sees the big modules as an iterative rather than disruptive technology, and therefore they’re easier to grasp and be seen as bankable by the institutional finance community. He shared cost-benefit scenarios comparing 500-watt-plus LFMs and smaller-dimension, 400-watt-range modules that showed significant holistic cost savings across the balance of systems (BOS) when LFMs are deployed on 16-20 MW-DC projects using either single-axis trackers or fixed-tilt racking. 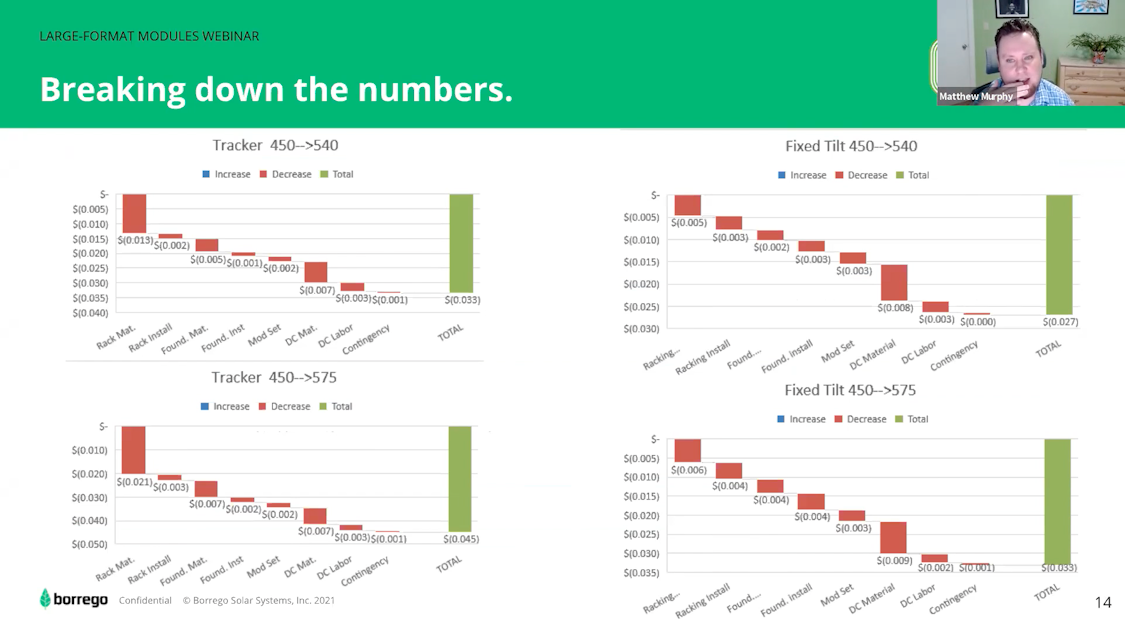 With the accelerating pace of module innovation over the past few years, I noted that LFMs are a great way to increase the value of utility solar assets. Borrego is “all in” on bifacial 182-mm LFMs, on both the development and EPC sides. As I explained in the webinar, a case study of a Washington project featuring three 7-MW sites using LFMs on trackers revealed 5 cents per watt net savings on capital expenditures and a better than 1% yield gain in plant performance. 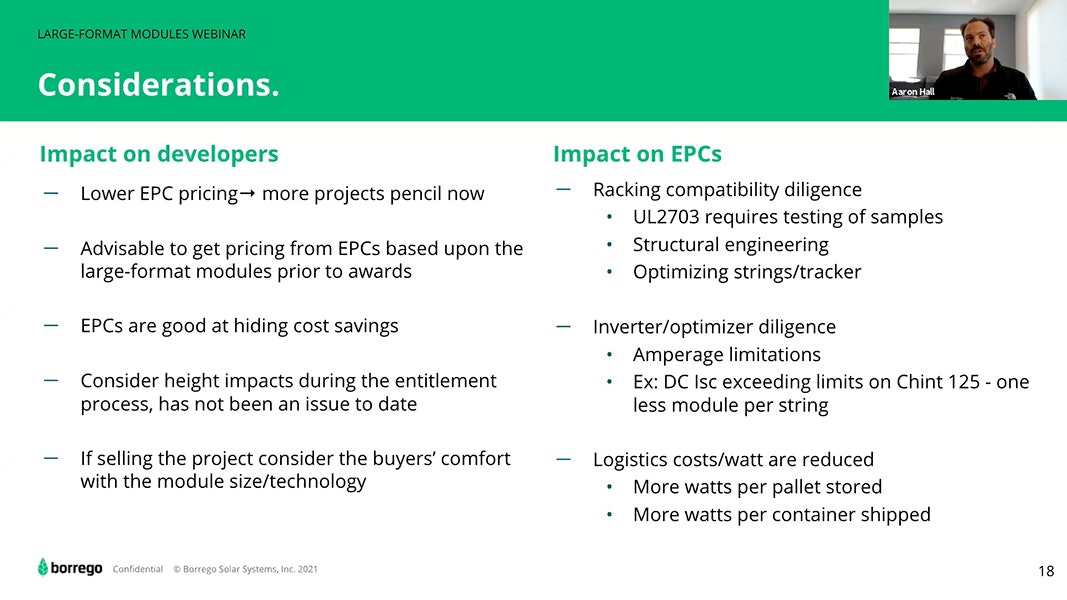 I also point out a few things that need to be worked out in order to smooth the adoption of the supersized panels, such as adapting some trackers with longer module clamps and updating inverters to handle the higher short-circuit currents produced by the LFMs. And, in terms of logistics benefits, I cited the greater watt density of module shipping containers filled with 182-mm products — meaning fewer containers needed per project.

While it’s early days for LFMs actually being shipped and racked on U.S. job sites so far, the first major projects featuring the big modules will start to be constructed later this year.

To watch a replay of the webinar, sign up here. 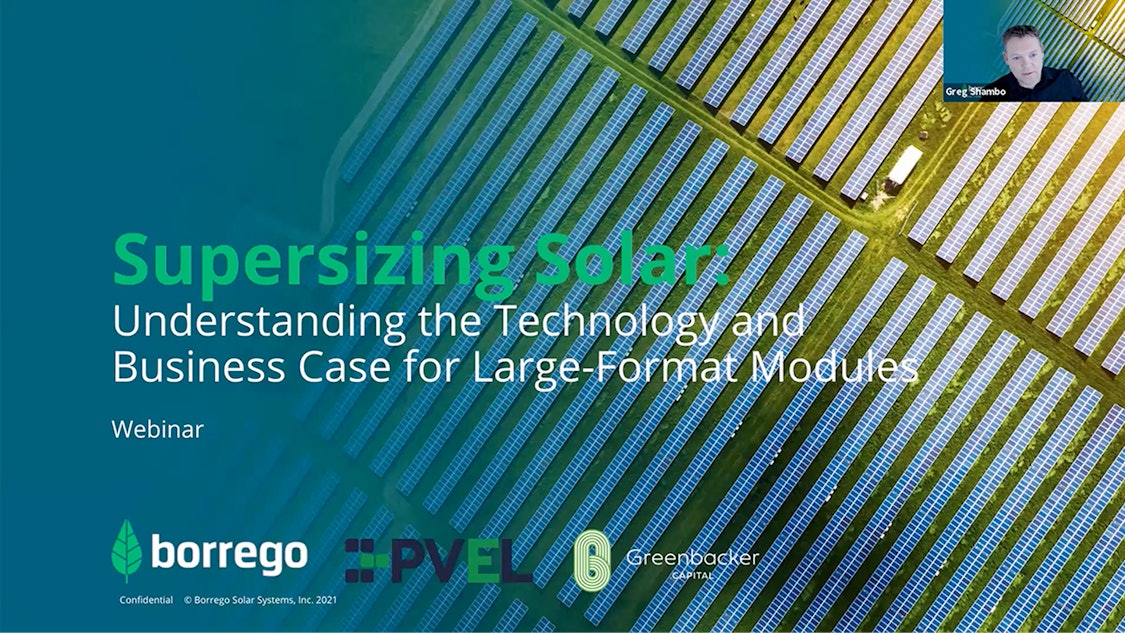